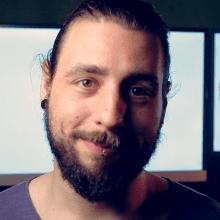 Chris has been doing vocal gymnastics ever since he realised he could make people laugh with impressions. Armed with a background in film production, Chris turned his sights on using his voice to do more than teach his cinematography students, and entered the world of voice over.

Specialising in character acting, Chris is a self-described vocal chameleon with a myriad of different deliveries, tones and accents ranging from extremely comical to ominous and mysterious.

The benefit of this flexibility is that he can fit himself into almost any role. Whether it is an energetic ad read, a gentle educational guide or an Irish pole-vaulter whose car broke down somewhere off the coast of Italy, Chris can bring your script to life.