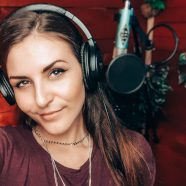 Born in South Africa, Amy grew up performing on stage in musical theatre before completing degrees in both Copywriting and Filmmaking in Cape Town. With over 9 years of experience in voice acting and copywriting/directing other voice artists in-studio, Amy continues to lend her voice to a wide range of platforms – including radio, TV, video games, eLearning, explainers videos, animations, audiobooks, IVR and more – both locally and internationally. Most recently, she was cast as the lead voice of Tony Thompson in the worldwide animated feature film ‘The Little Vampire 3D’, alongside some stellar big-name artists. Her incredible range and knowledge of the field allow her to perfectly voice almost anything for anyone.